This is a follow-up on my earlier article that described how to use BASIC Authentication with a WCF REST Service. The disadvantage of that solution was that you need a https tunnel to really secure the username password verification process. Although possible, this is not always a feasible situation, for example, if you don’t want to invest in certificates or loose performance when using a https tunnel.

This article explains a different authentication mechanism called Digest Authentication which provides an alternative. This security mechanism is more secure than Basic Authentication and does not have the drawbacks from using a https tunnel.

Digest communication starts with a client that requests a resource from a web server. If the resource is secured with Digest Authentication, the server will respond with the http status code 401, which means Unauthorized. 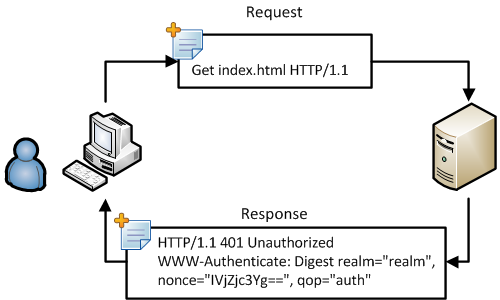 An internet browser responds to this by presenting the user a dialog, in this dialog the user is able to enter his username and password. Note, that this dialog does not show the warning about transmitting the credentials in clear text as with a Basic Authentication secured site. 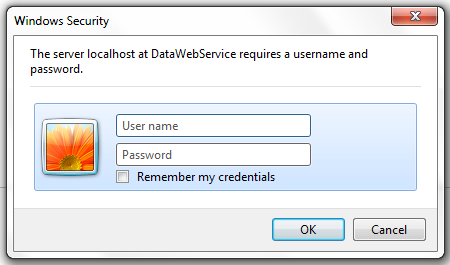 When the user enters the credentials in this dialog, the browser requests the resource from the server again. This time, the client adds additional information to the HTTP header regarding Digest Authentication. 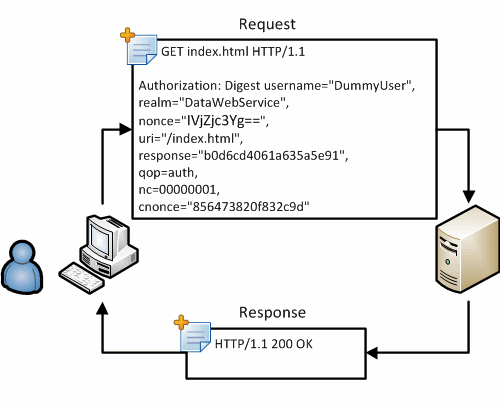 The server validates the information and returns the requested resource to the client. The details of the response from the server and the additional request of the client will be described in the following part of this article.

When the server responds to an unauthenticated client request, the server adds a nonce and a qop key to the header of the HTTP response. Both are typical for Digest Authentication. First, the nonce will be described and second the QOP quality of protection.

The Nonce stands for “Number used Once”, this is a pseudo random number that ensures that old communications between a client and a server cannot be reused in replay attacks. A replay attack is a network attack in which previous valid data transmission is repeated. This is done by an adversary who intercepts the data and retransmit it. According to the RFC 2716 specification, the Nonce is a server specified data string which should be uniquely generated each time a 401 response is returned by the server. The 401 response that is sent back to the client includes the Nonce generated by the server. According to RFC 2716, the client should add this nonce to the header of next requests.

The nonce is generated by base64 encoding the string that is constructed by concatenating the time stamp, a colon and a generated private hash. In the source code, this is handled by the NonceGenerator class which has a Generatemethod that generates the Nonce string.

MD5 is used to generate the private hash of the string that is constructed by concatenating the time stamp, a colon, the IP address of the client, a colon and a private key that is only known to the server. As MD5 is used, the generation is one-way. It is not possible to reconstruct this information from the private hash.<

In the source code, generating the private hash is handled by the method Encode in the PrivateHashEncoder class. It uses the MD5Encoderclass to actually generate the MD5 hash.

After the Nonce has been generated the server can validate it.

The first thing that this implementation on the server does is validate if this PrivateHash was generated by this server and returned to this client. The server does this by generating the PrivateHash with the time stamp that is available in the Nonce and the IP address of the client. If this does not deliver the same PrivateHash as in the nonce from the client, the nonce is incorrect and the server responds with a 401. The NonceValidator is responsible in the source code for validating this nonce.

Secondly, the server checks if the Time Stamp is too old. The server holds a certain time-out for a nonce. For example, the time-out is 300 seconds. The server validates if the time stamp in the nonce is not older than 300 seconds. If the nonce is older than 300 seconds, the server returns an indication in the HTTP header that the received nonce is too old together with a new nonce. RFC 2617 uses a special key called Stale in the header that is sets to true when the Nonce is too old. The NonceValidator is also responsible for checking if the time stamp is too old.

By using a time stamp and the IP address in the nonce, we make sure that the request is recent and comes from the client that requested the resource.

Note that it is a request from the server, the client itself is allowed to choose a lesser secure qop algorithm. If the server requests for auth, it is ok for the client to start communicating with the default or none qop.

The implementation with this article supports both default/none and auth. The class DefaultDigestEncoder and the class AuthDigestEncoder implement the default and the auth type of quality of protection. Both classes derive from DigestEncodeBase which holds common functionality. 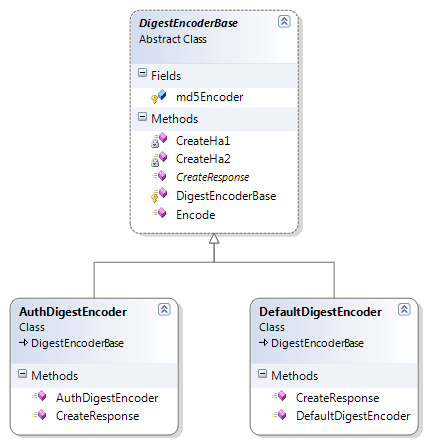 At runtime, the server instantiates both types of encoders and stores them in a dictionary with the qop algorithm as the key.

This enables the server to easily switch between different types of encoders at runtime.

##None or Default QOP

When an internet browser receives 401 HTTP status code with Digest in the authentication header, it will show a dialog for entering the username and password. When the client uses the default qop which is compatible with RFC 2069, the client encrypts the user name and password as follows.

This is why the Auth algorithm is more secure than Default, the server performs an additional check to see if the nonceCount is incremented by the client with every request. The CreateResponse method of the AuthDigestEncoder generates the Auth response.

To be able to integrate Digest Authentication with WCF REST, the WCF REST framework has to be extended. This is done by creating a custom RequestInterceptor. For more information, take a look at my previous article which explains this extension in more detail.

If you want to secure your own WCF REST service with Basic Authentication using the provided source code, you need to execute the following steps:

The provided source code is developed using TDD, and uses the NUnit framework for creating and executing tests. Rhino Mocks is used as a mocking framework inside the unit tests.